The Medigap Plan F is currently the most common and comprehensive Medigap plan. It is designed to fill all gaps in the “original” health insurance coverage (Part A — Hospital and Part B — Physician/Outpatient). If you have Plan F, the plan must pay deductibles and co-payments/coinsurance for all Medicare approved fees, leaving you free of pocket fees.

The advantage of Medigap Plan F, compared to other standardized Medigap plans, is the predictability of costs for you. For a fixed income person, this level of coverage can be attractive, because you know what your premium is and you don’t have strange or unknown costs, no matter how you use health care.

The most important thing to know about Medigap plans, in general, is that plans are standardized at the federal level. This means that an F plan with a company is exactly the same as an F plan with a different company. Plans also operate the same way (regardless of the company), as claims are automatically paid through Medicare’s crossover system and the plans can be used by any physician or hospital accepting health insurance nationally. When comparing Medigap plans, including Plan F, the most important factors to consider are the price and reputation of the company.

What Does Medigap Plan F Cover? 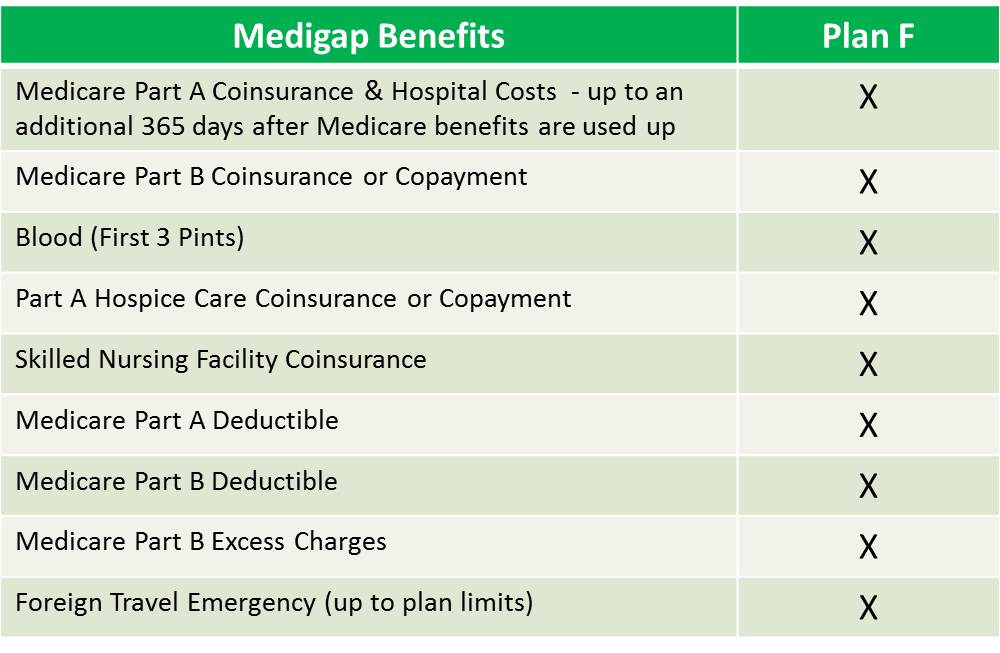 What exactly is covered in Medigap F plan? As mentioned above, Plan F is the most comprehensive Medigap plan. With Plan F, you would not have a charge for anything covered by health insurance. Medicare pays its share, then Plan F takes the rest. Here is a list of the benefits that are included in all F plans:

These benefits fill the “gaps” in the “original” medicare (Part A and Part B). The benefits for all schemes are visible in the Medigap coverage table.

How Does Medigap Plan F Work?

The Medigap F plan works in the same way as other Medigap planes. First, Medigap plans can be used wherever medicare is accepted, nationally. There are no networks on the Medigap plans. Plans are NOT PPO or HMO plans. They “follow” medicare.

Second, the Medigap F Plan (and other Medigap plans) pays for applications through Medicare’s crossover system. This is Medicare’s automated system, in which Medicare pays its share directly to the healthcare provider and coordinates the payment of secondary insurance (Medigap Plan). There are no claims for the insured to be subject to the Medigap plans.

One of the recent developments with Plan F is the imminent end of the scheme for new beneficiaries. In April 2015, Congress passed the Medicare and CHIP Access Reauthorization Act of 2015. This bill, among other things, sets the end of coverage of the “first dollar”, specifically Plan F and Plan C. Medigap’s “First Dollar” coverage is the one that has a plan that pays for everything medicare does not pay. Although this premise is certainly questionable, Congress emphasized the theory that medicare recipients “over-exploit” benefits when they do not have a “skin in the game”. Whatever the reasons or legitimacy of these reasons, this bill was passed and will come into force in 2020.

What does this mean for F plan members? First, while the Bill does not specifically provide it, most expect current policyholders to maintain their existing Plan F policies (“grandfathered”). This has occurred in previous cases of completed plans (i.e. renormalization of the 2010 plan). But the new insured would not be able to have access to the scheme. This leads to two schools of thought regarding Plan F. The first school of thought is to get Plan F as long as you can, as the plan will not be available after 1/1/2020.

The second school of thought, probably the most valid, is that the imminent end of Plan F should warn anyone to choose this plan. Once the plan is eliminated as an option for new beneficiaries, the population of the plan will become older and older, resulting in an increase in benefit rates and likely higher or higher rates for these policies. This is not only a theory, but also what happened in the past when plans were eliminated (i.e., when Plan J was eliminated in 2010).

The Medigap F Plan, regardless of the end of the 2020 plan, may not be the best deal for your situation anyway. As always, you should look at the rates for your specific postal code, as rates vary considerably from one geographic area to another. But often other plans will have more financial sense. For example, the only difference between the Medigap G and F plans is the deductible coverage under Health Insurance Part B, which is $198/year (by 2020). In other words, the only cost to pay for a G plan is $198/year.

Generally, premium savings in “G” compared to “F” are $240 per year to $500 per year. Therefore, it would certainly make financial sense to save 240-$500/year in exchange for a payment of 198$/year.callout8 For more information about Medigap Plan F or a list of companies and rates for your region, do not hesitate to contact us or call us at 1(877)255-0284.

Our site also contains more specific information about the plans, which you can review here: