Medigap Plan G quickly becomes one of the most common options when it comes to Medigap plans. And often Plan G is one of the best financial “offerings” medigap plan With the recent announcement of the imminent end of Plan F in 2020, many recipients consider Medigap Plan G as a comprehensive alternative. Even before this announcement in 2015, Plan G had proven to be a winner in terms of premiums, rate stability over time and full coverage. 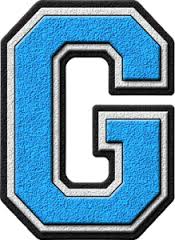 The most important thing to remember when it comes to Medigap plans is that plans are standardized at the federal level. This means that all companies offer exactly the same coverage plans. The coverage comes from the Medigap coverage table. Therefore, while rates may vary considerably, benefits are still the same for Medigap plans.

Similarly, plans also work the same way, you can use the same places and pay for claims in the same schedule and amounts. Therefore, when it comes to comparing Medigap plans, you need to compare the price and reputation of the company.

What Does Medigap Plan G Cover?

Let’s take a look at what Medigap Plan G covers. It is one of Medigap’s most comprehensive plans and covers everything medicare does not cover, with the exception of the Medicare Part B deductible, which is currently $198/year (2020). This is the franchise of the doctor’s office. Usually 1-2 visits to the doctor knock out the franchise. Regardless of whether you respect the deductible or not, premium savings are often large enough to make the plan a better deal anyway (more about this later).

So what does Plan G cover: 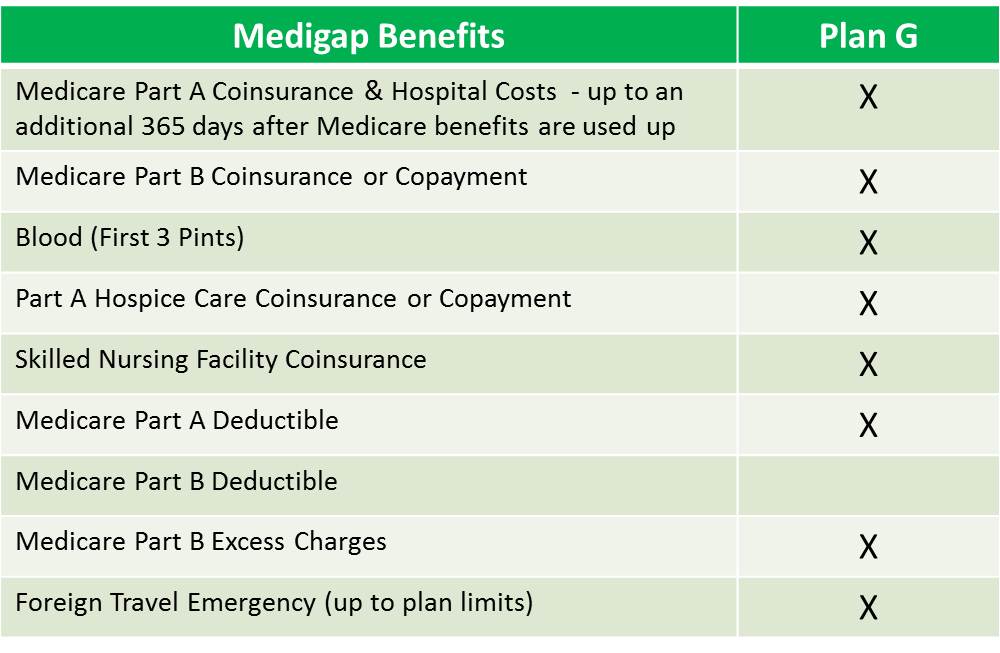 It is an easier exercise to talk about what Plan G does not cover. One thing is the deductible of Health Insurance Part B ($198/year by 2020). All other expenses are covered by Medigap Plan G and this deductible amount is your maximum total cost for the year.

How Does Medigap Plan G Work?

Medigap Plan G is a federally standardized Medigap plan. As such, it works like other Medigap plans. All Medigap plans, regardless of your insurance company, can be used in ANY doctor or hospital taking Medicare nationally. There are no networks to stay in networks or typical PPO/HMO concerns. In addition, all claims are automatically processed through the “crossover” system of health insurance. This is the Medigap system for coordinating payments from the secondary insurance provider (your Medigap plan).

It will ensure that the policyholder does not have to participate in the claims process. Applications approved by medicare are automatically paid by the Medigap plan. There is no approval or refusal process: If medicare pays, Medigap pays. If medicare does not, the Medigap plan does not.

In recent years, many companies have significantly lowered their rates in Plan G. Although some of them initially thought it could have been a “business buying” tactic that would lead to substantial subsequent increases, this has not been confirmed so far in most companies. Diet G rates are among the most stable of all plans. There are several important reasons for this. Plan G MediGAP Rate Stability First, Plan G is not offered as a “guaranteed problem” option (no health issue) in situations where a person loses group coverage or Advantage Medicare. In such situations, applicants can obtain a handful of Medigap plans (including Plans A, C and F) on a “guaranteed” basis.

Thus, a person with pre-existing conditions who lost their group coverage would be eligible for Plan F, but NOT under Plan G. Over time, the “group” of the insured Medigap G plan is, on average, healthier and fewer claims. This, in turn, leads to a decrease in increases in “G” rates compared to other plans, including the F. This is not a theory, but it has proven to be accurate over the last 10 years, with average annual increases in the Medigap Plan G being approximately 2% lower than the average annual increases in the Medigap Plan G.

Plan F. second major advantage of Medigap Plan G is that it is often a better deal than other options. Compared to Plan F rates, Plan G rates are usually lower from $240 to $500 per year. The Part B deductible, which is the only difference between “F” and “G”, is currently $198/year. Thus, you can potentially save a few hundred dollars with “G” (and have a more stable plan) by paying this deductible. One thing to keep in mind when comparing plans is that insurance agents are financially encouraged to increase their premium.

Where Can I Use a Medigap Plan G?

Medigap Plan G is just like other Medigap plans: It can be used in any doctor or hospital taking Medicare. This is true, regardless of which insurance company insured you under your G plan, whether it’s a “branded” company or a smaller, more local insurer. When a doctor agrees to take medicare, he or she also agrees to take one of Medigap’s standardized plans. One of the biggest advantages of Medigap plans is their portability.

These plans can be used through the state and are accepted anywhere in the country taking health insurance. It is one of the biggest differentiating factors of Medigap and Medicare Advantage. Advantage plans are network-based plans based on your county of residence. If you travel with this type of package, in most cases, you will be off the network, which would cause you to pay higher extra charges. On the contrary, Medigap Plan G can be used anywhere in the country accepting medicare.

In recent years, with the growth in popularity of Plan G Medigap, more and more companies have begun to offer this plan. Then, with the recent announcement of the elimination of Plan F in 2020, Plan G will now be the most comprehensive plan offered (after 2020).

All of this has led to a very competitive market for Plan G in most places. For example, a market research conducted in ten different states reveals that there are 8 or more insurance companies within the $10 per month premium of the lowest G Medigap premium (January 2020).

Among the largest companies with competitive prices in many markets include Aetna, CIGNA, Mutual of Omaha, United Healthcare and Transamerica. But apart from the largest and best known companies, there are also other lesser known companies that offer Plan G (note that the benefits, coverage and operation of plans are identical to all G plans), including companies like Bankers Fidelity, Liberty Bankers, New Era, Manhattan Life, Thrivent Financieros and other types.

As always, when comparing Medigap plans, it is essential to get a full comparison of the Medigap G Plan fees for your region when choosing a plan. You should turn to companies with a competitive price and highly appreciated when choosing a G plan. It is both reckless and unnecessary to pay an “extra” for the same thing.

When Can I Sign Up for a Medigap Plan G?

Please note that there is an annual election period that runs from October 15 to December 7 of each year. Many health insurance recipients, insurance agents and advertisers mistakenly call the “open registration” period. This period has nothing to do with the Medigap G plan or other Medigap plans; it concerns only Part D prescription drug coverage and medicare replacement plans such as Medicare Advantage. Therefore, the best time to enroll in the Medigap G plan is when you are 65 years of age or start Part B of Medicare for the first time. After that, you can sign up for a Medigap plan or modify the Medigap plans at ANY time. However, in most states, this requires answering certain medical questions and obtaining “approval”.

So it is wise to do this when you are eligible for the first time. There are certain situations that are considered “guaranteed problem” situations, during which you do not have to answer medical questions to enrol in a Medigap diet. Some of these situations include loss of group coverage or loss of benefit coverage due to a move. During these periods of “emission guarantee”, you can get certain plans based on the “guaranteed problem”.

However, as mentioned above, the packages offered under “Guaranteed Issue” do not include Plan G. If you would like to learn more about Medigap Plan G or a list of companies and rates for your region, please feel free to contact us for quotes from Plan G Medigap or call us at 1(877)255-0284.

Our site also contains more specific information about the plans, which you can review here: